Client: Hotel Terme Apollo
Model: Alessia Bernardi
Agency: morettibarbiero.com
Underwater Photography: Andrea Mescalchin
Lighting&retouch: Matteo Mescalchin
Crew&Equipment: digitalmovie.it
Lighting gear: ChimeraLighting
Underwater Housing: Easydive.it
BTS shots: Giovanni Santon
Since our first phone conversation with art director Andrea Moretti at morettibarbiero agency, we at digitalmovie were excited and determined in doing a good job.
As underwater specialist Andrea Mescalchin started working on preproduction right away listing all needed equipment and safety issues.
Given the reference images and mood board for the AD campaign, it was clear to our team that such a visionary image could have been done in CGI and some photo manipulation. It happens though that Alessia Bernardi at Hotel Terme Apollo not only is a great model but she's also an experienced scuba diver. That said, we decided to go more on the side of a 'real image' creating the artwork right in camera as far as possible.  With the hindsight having Alessia on set turned out to be our best asset as it would have been crazy to attempt this shoot without her refined skills in posing underwater.
Having the camera on a tripod has been a good choice for underwater photographer Andrea Mescalchin to fine adjust the framing but also allowed for later layering and mixing small elements like extra bubbles into the image editing.

Final ADV image.
As for the lighting set up, I embraced the idea of having a single studio strobe firing right from above as it would be a perfect match with pre-envisioned image look. Overpowering the sun, I've been able to calibrate the lighting ratio between the model and the swimming pool right in camera fine tweaking it to desired levels. Art director Andrea Moretti attending the photoshoot from the surface had quick captures preview right off the water being able to provide live feedback on all the choices we faced.
As for the light fall off and fill we used different Chimera Lighting modifiers including a pancake lantern and small to medium size lightbanks achieving different image looks to be mixed in post. A 2x1 silver panel was placed underneath the camera facing up towards the model to adjust the fill light. 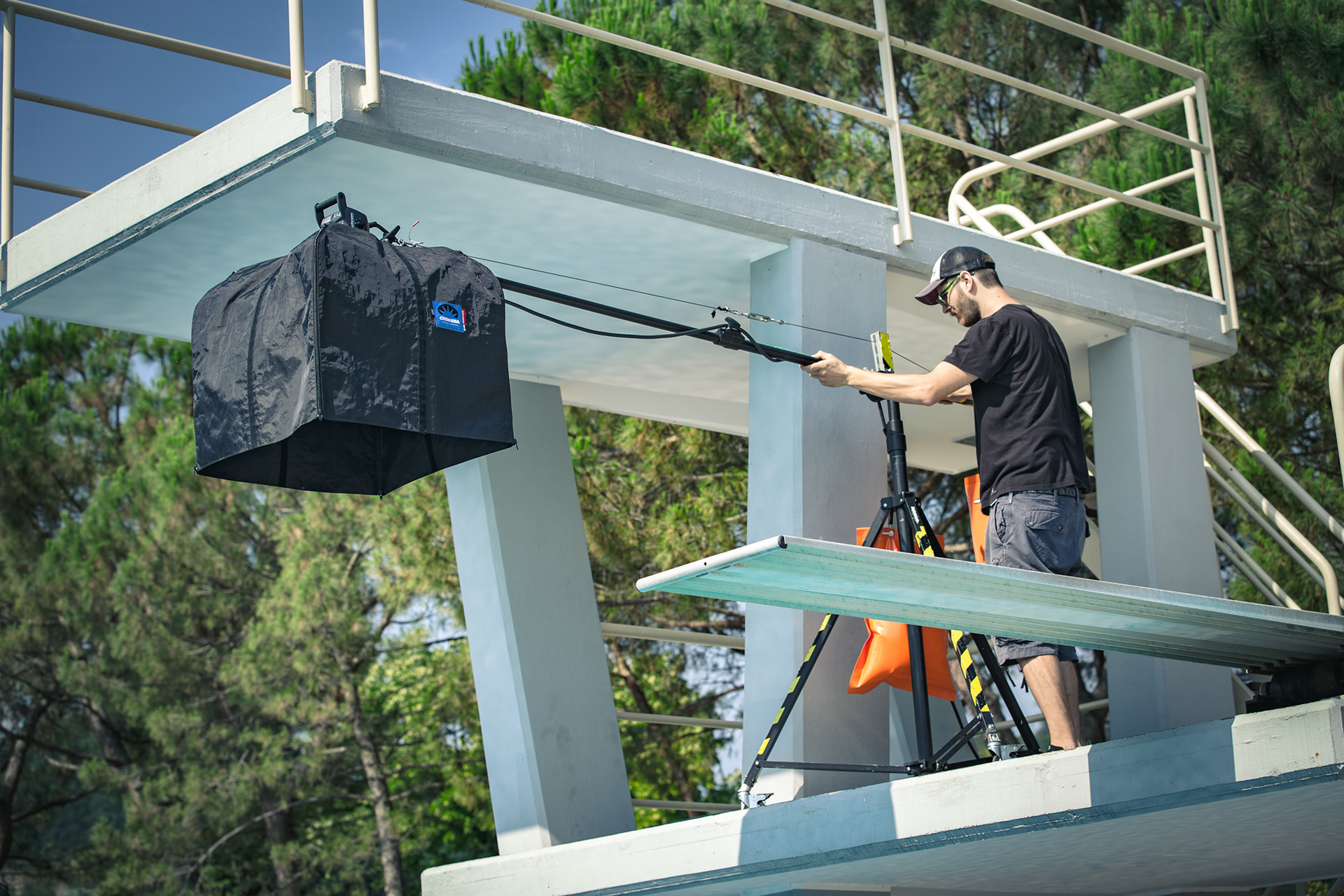 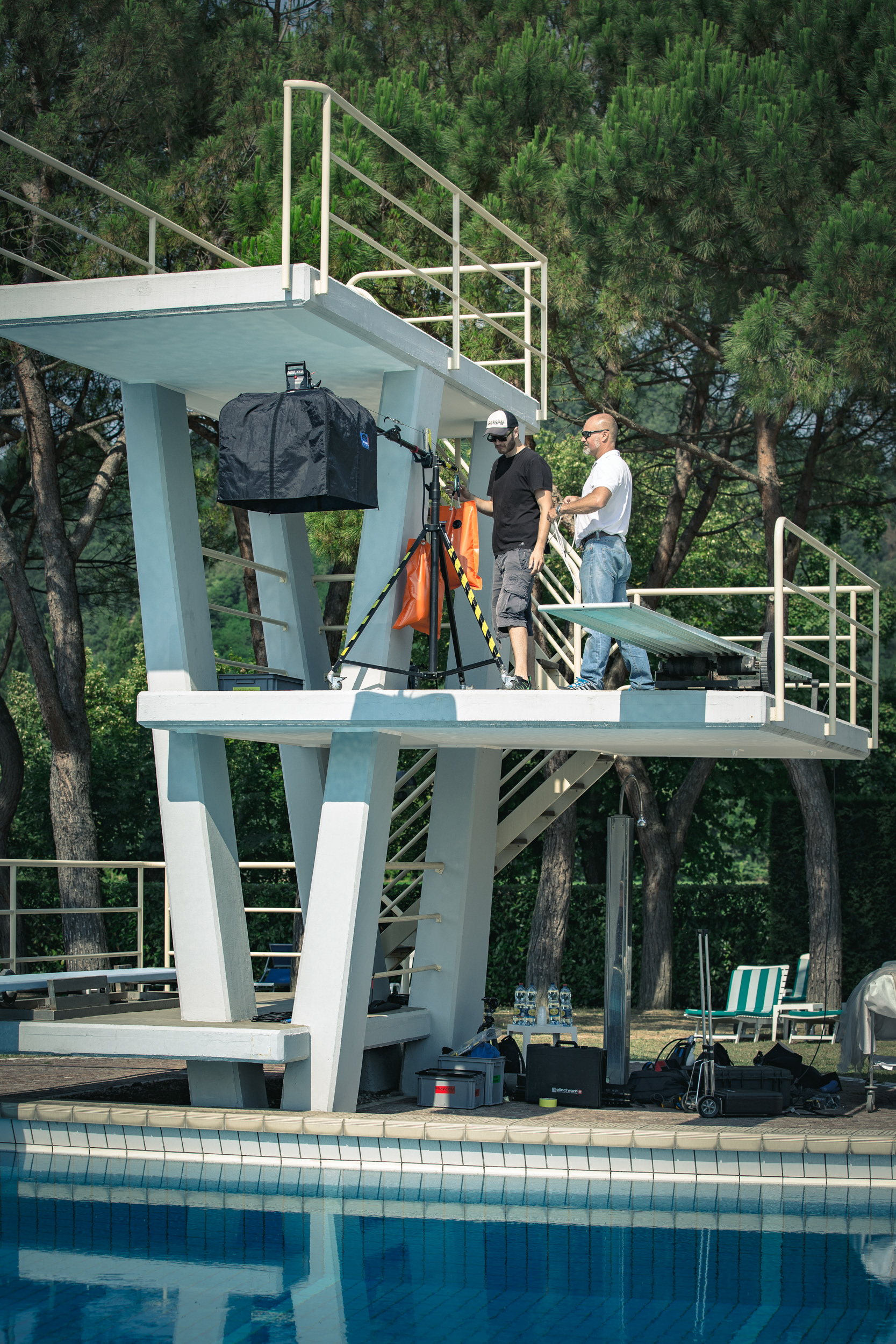 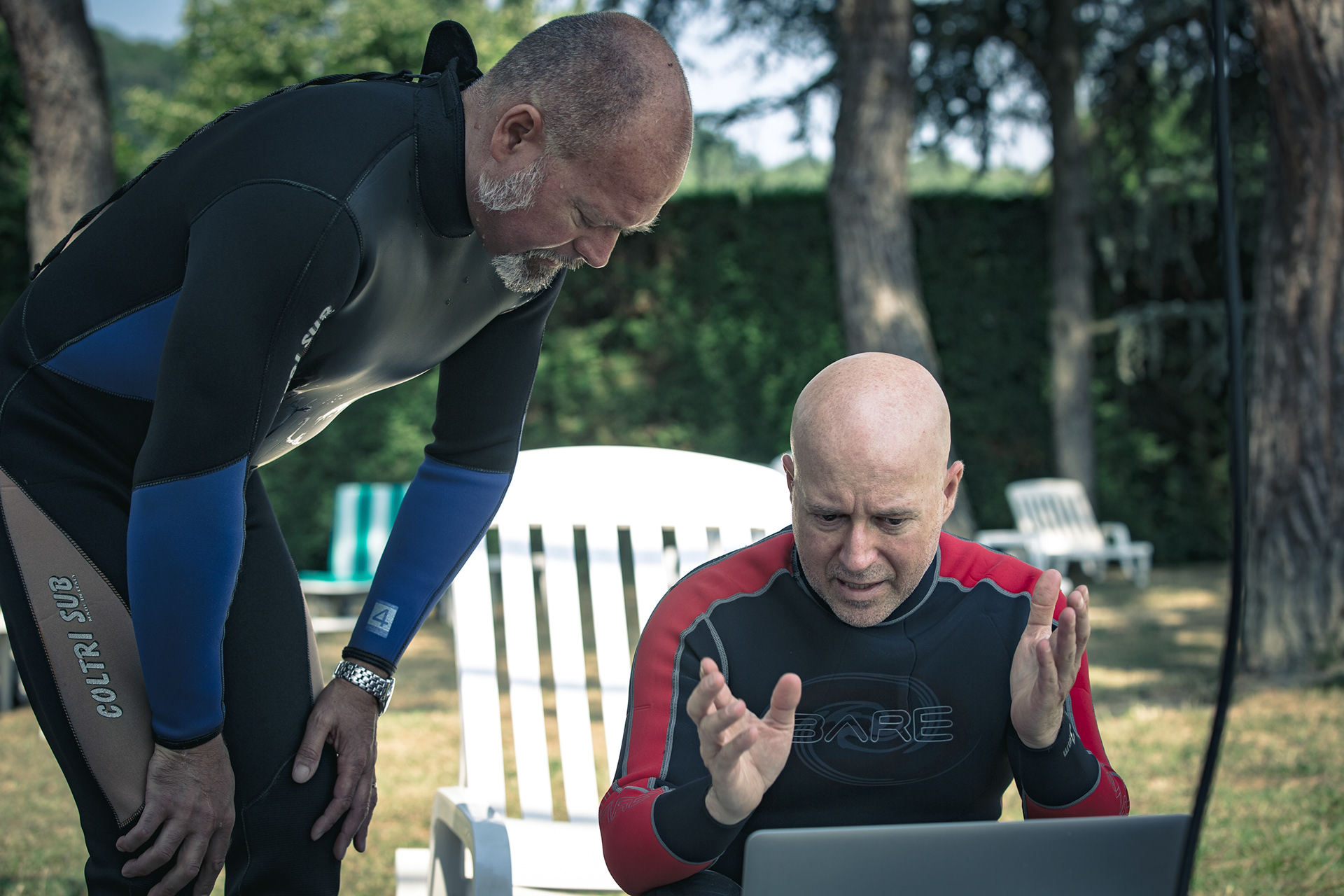 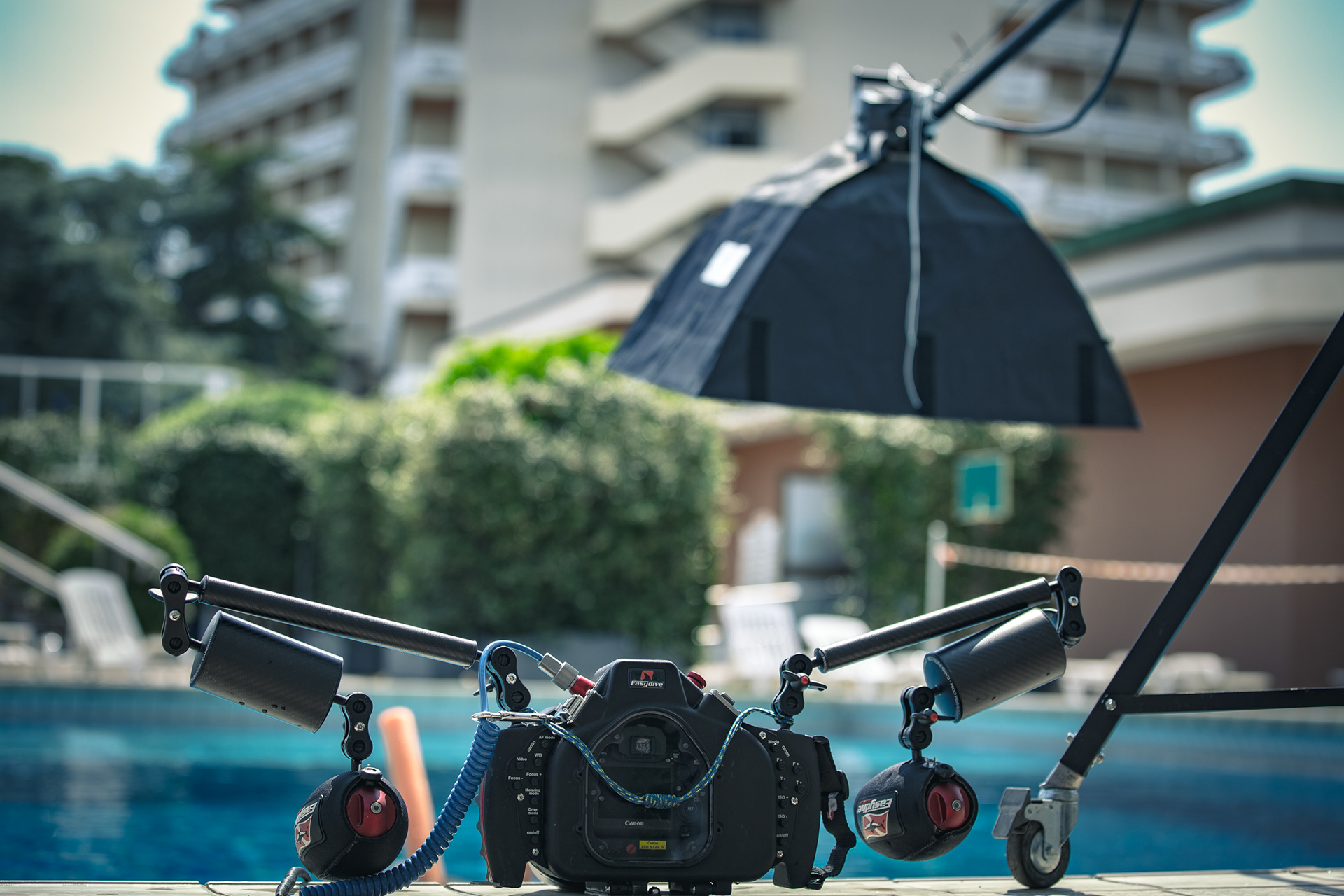 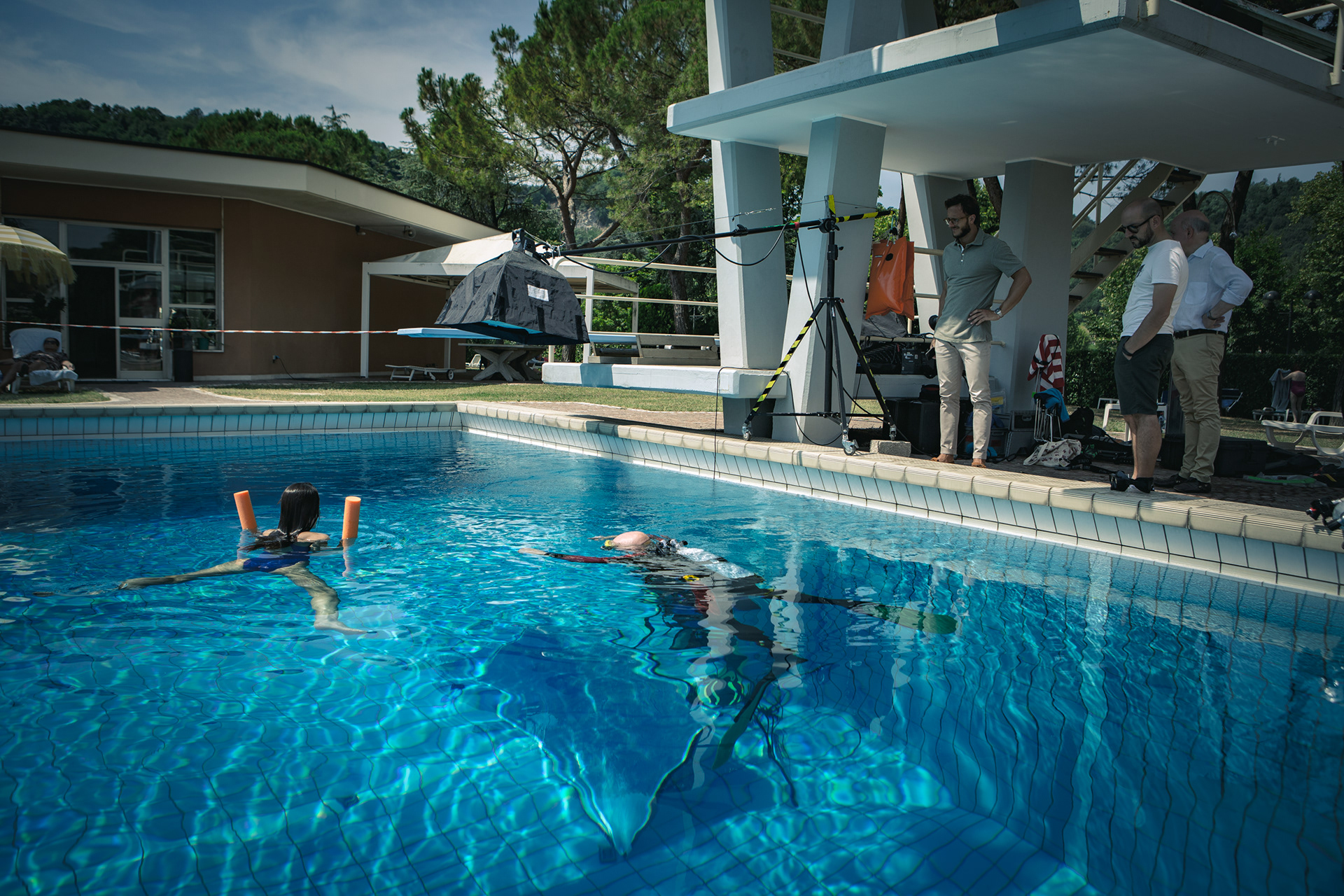 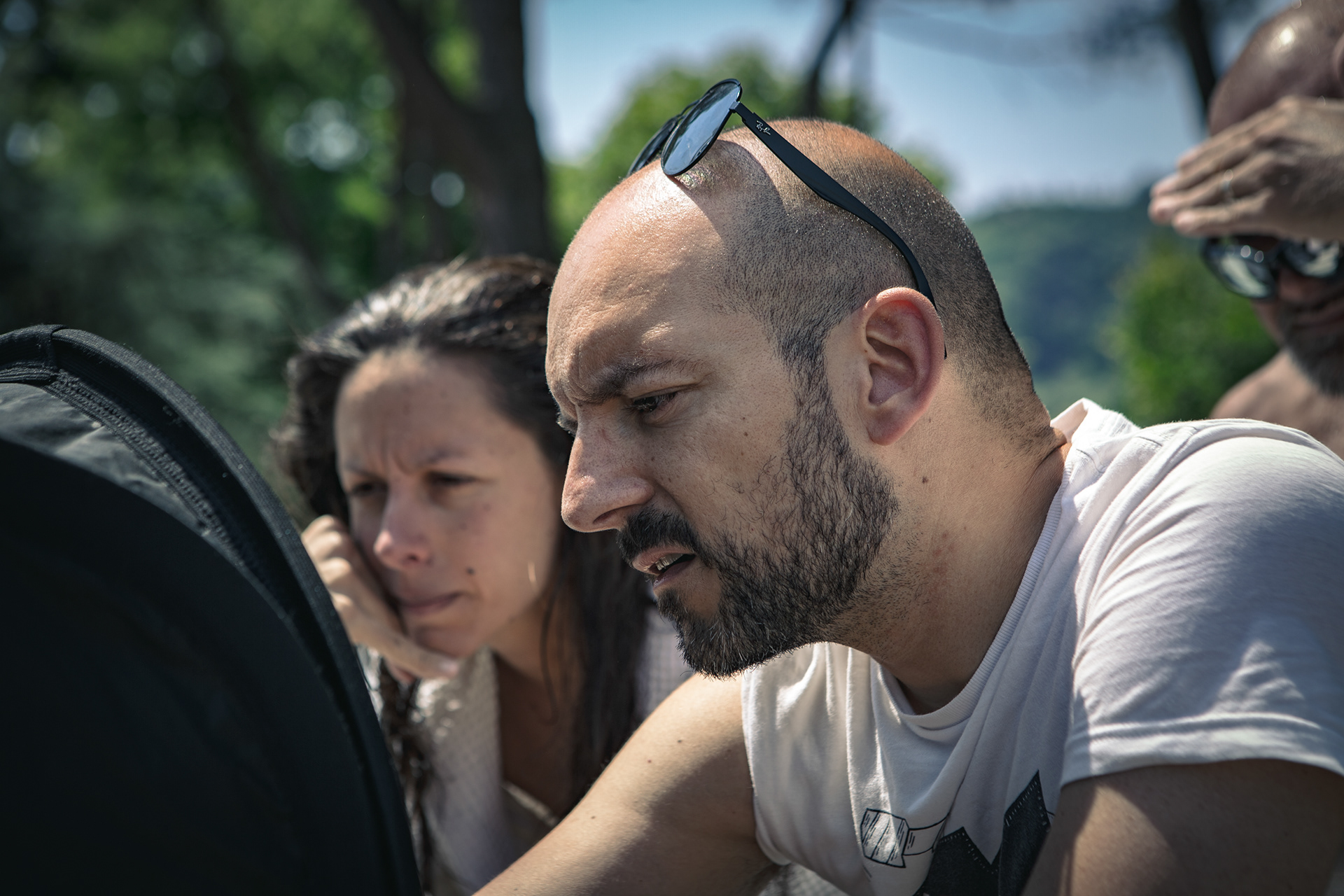 Great behind the scene shot showing lighting set up and camera position during the pre-lighting.

Underwater housing from Easydive ready to dive safely a Canon 5DMkIV. External strobe was triggered by custom-made sync cable by wetside.it
After pre-lighting work and some test shots, Alessia wore the floating costume and posed for some different body positions. The enriched Air I supplied in between the shots helped a lot in being more time efficient. Limiting the need for Alessia to reach the surface the small tank provided also a better buoyancy control. 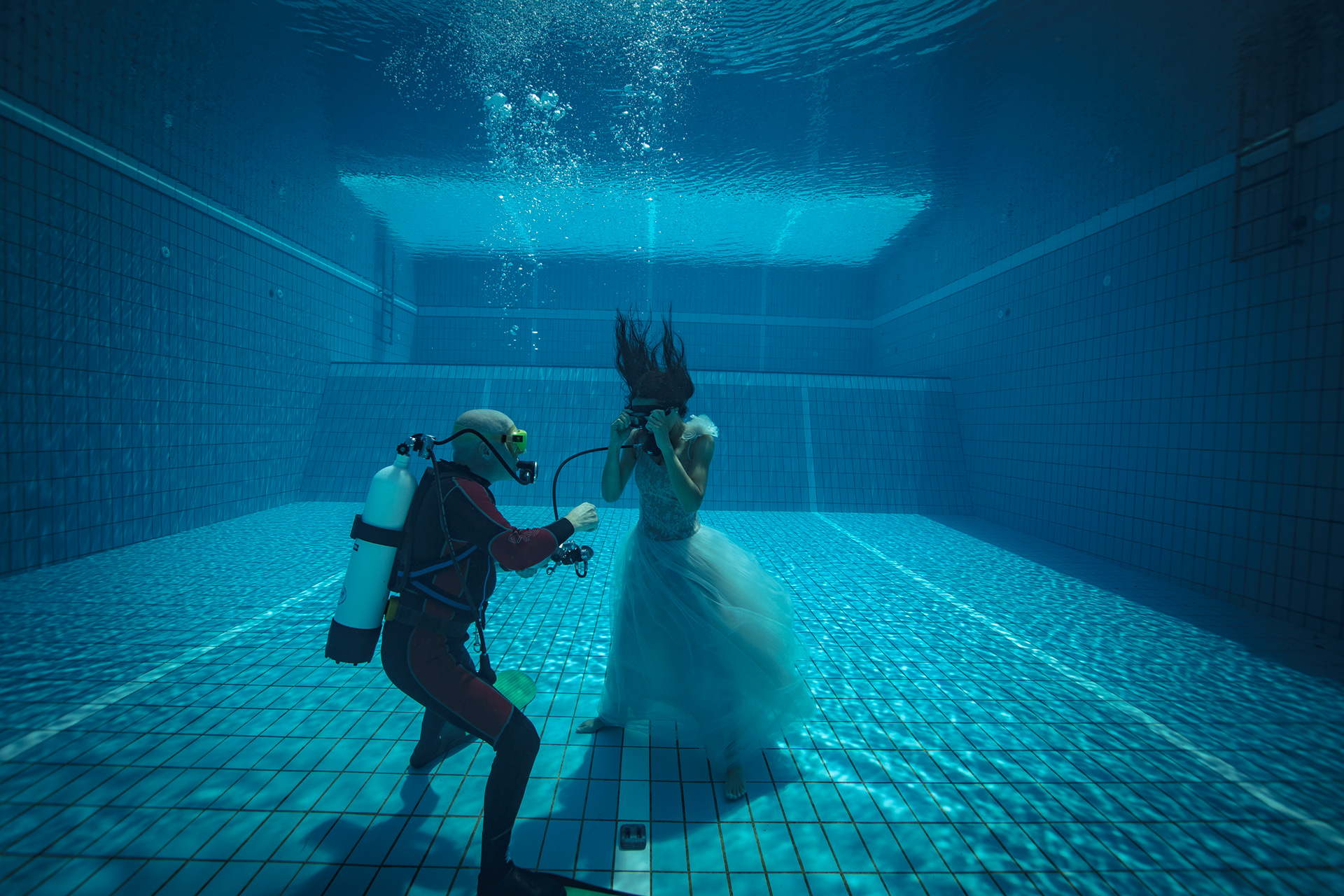 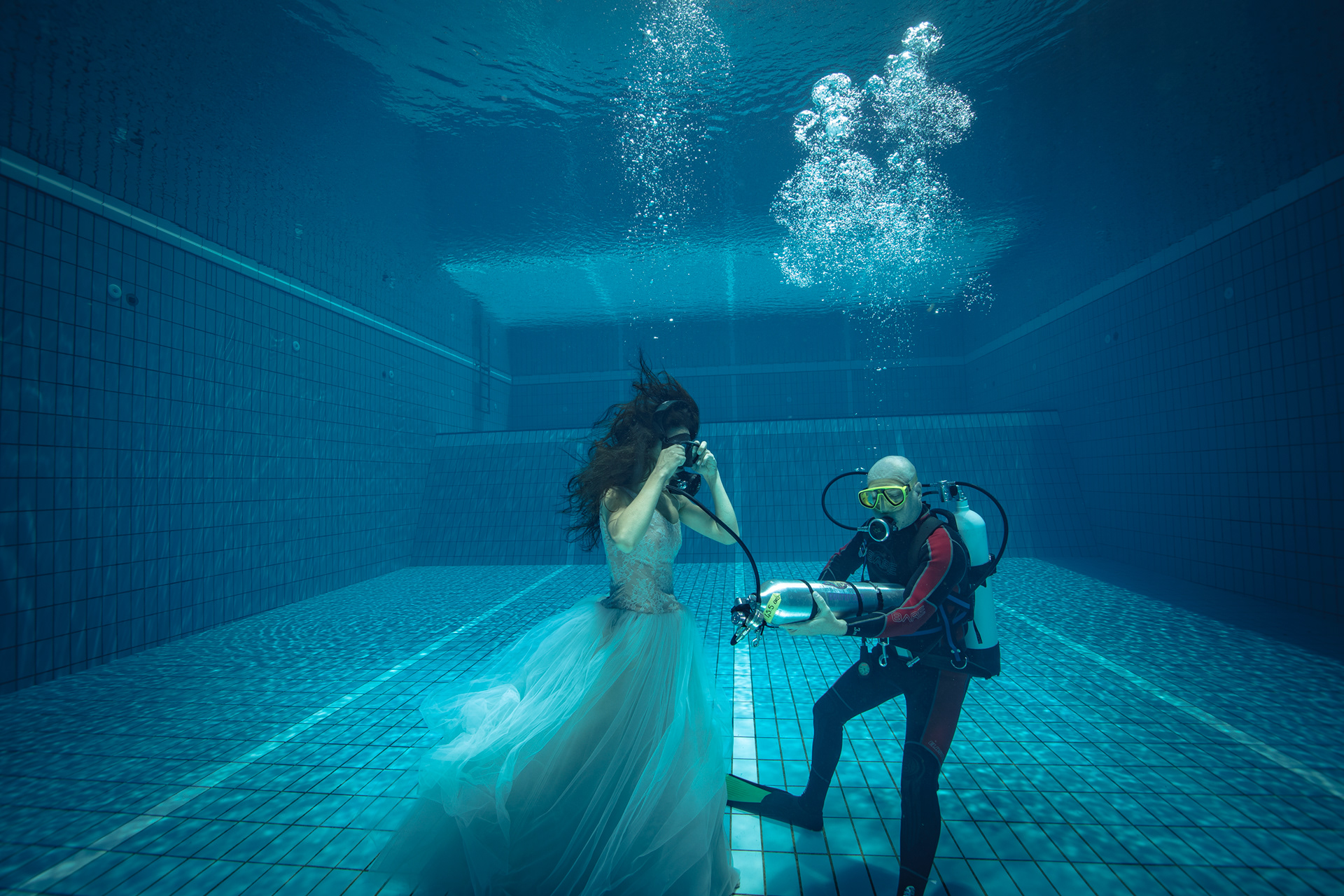 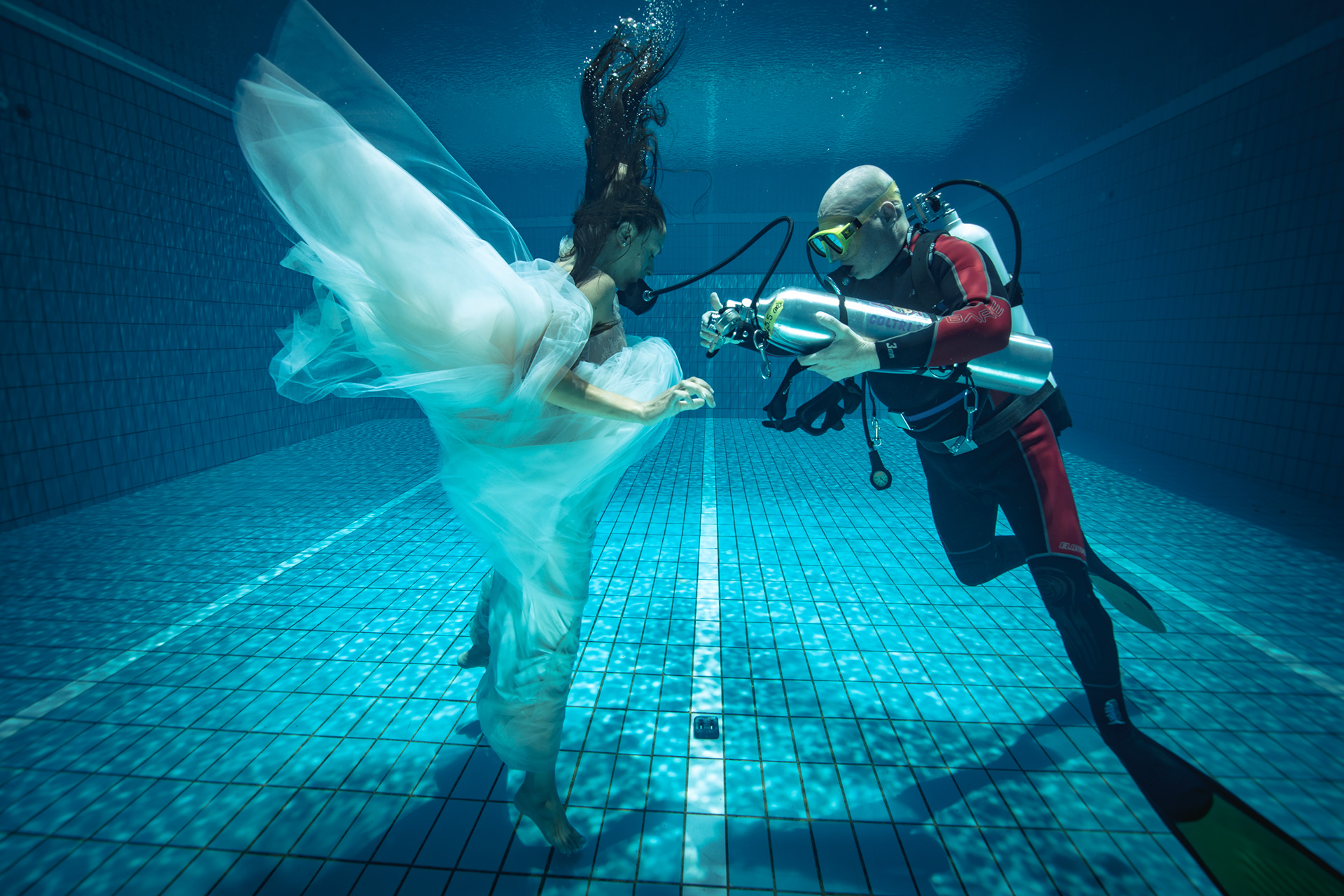 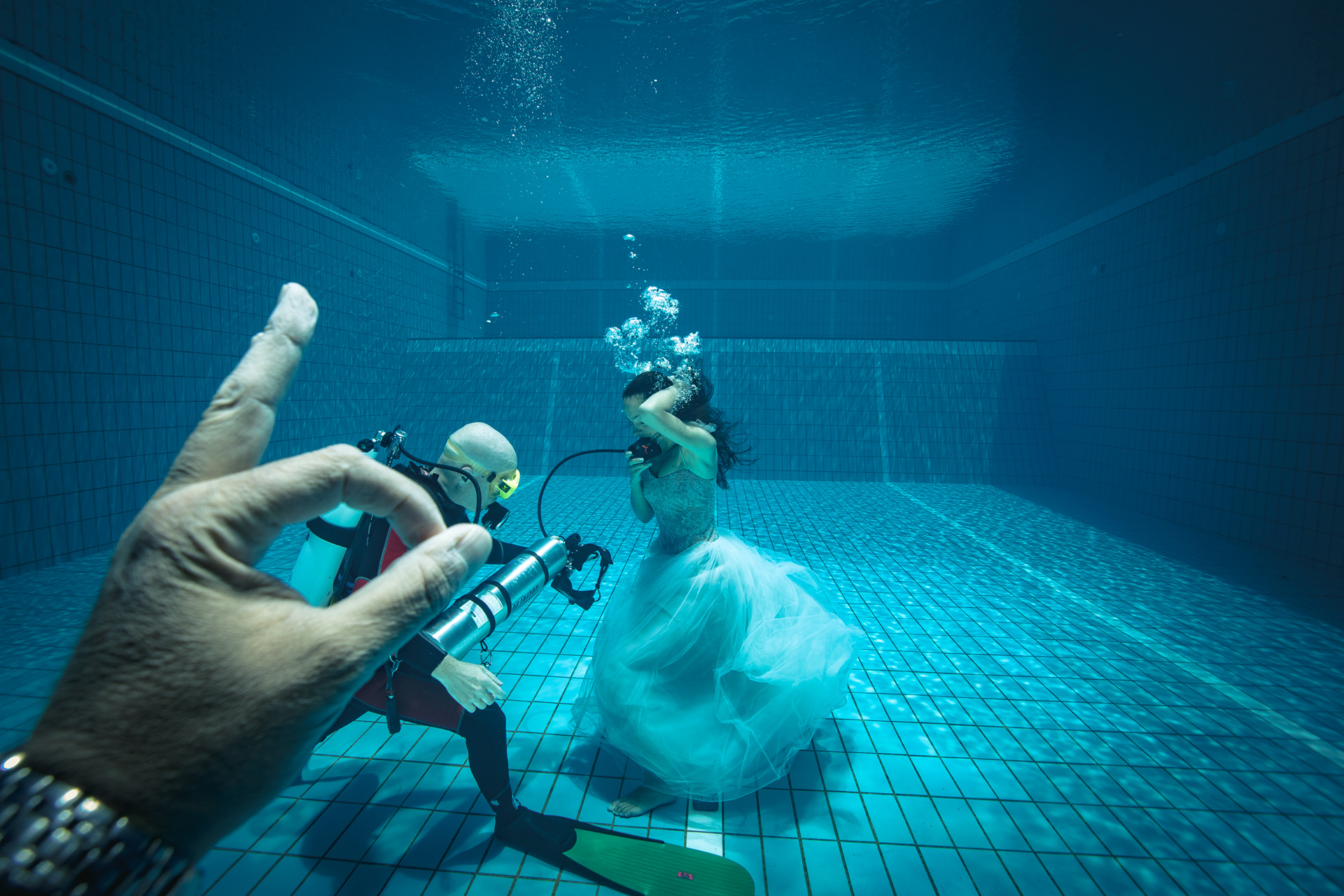 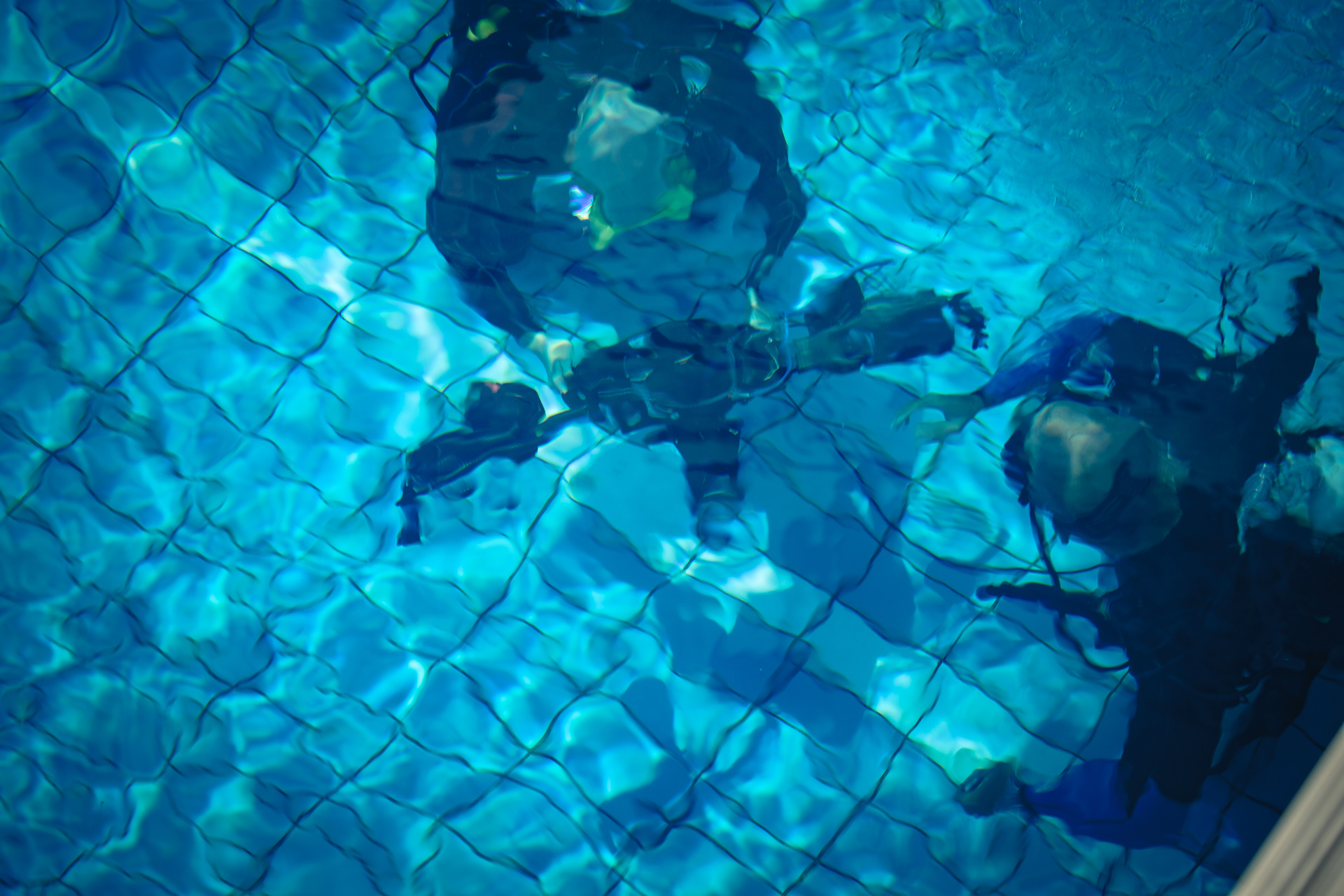 Model Alessia Bernardi standing by during the photoshoot ... EAN supply was both a safety measure and a time-saving solution.
WARNING: We do not recommend to do anything like this without proper training.

Final image as shown on the ADV output.
Thanks to all professionals in our team and all the people involved in the project for their work and support.
Thank you for watching.
↑Back to Top